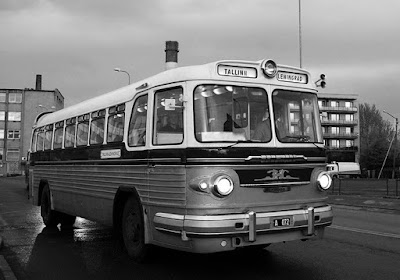 The Bus Back from Narva

Here’s the thing — delirious, right?
Two tech-eds taking a bus ride.
Past the plant called ‘Phosphorite’,
poisoning the whole of nature,
i.e. soil, and air, and water,
soon we’ll all be choked by it.
Bumpy road. Another turning
’s near. Exchange another gurning
sneer. For three straight centuries
they’ve competed, who’s more noisome —
Russia’s, Prussia’s, or Livonia’s
belching-smokestack industries.
High above its scorched-earth gradient
soars the donjon of an ancient
castle, one that keeps a watch
steady on its neighbour Russian.
Theirs is no polite discussion
’cross the river, but reproach.
And the Russian castle’s past it,
down into its derelict bastion
seeps the apathetic slime.
Here’s the thing – proof, emendation,
mockup, copy saved for later —
much like all the rest of life.
From Чудесный десант (The Miraculous Raid), 1985
(Translation © 2017 G.S. Smith)

V
«Что ж, будем петь, пуская петуха,/поменьше пить, потешничать потише»: Nikita Eliseev asserts that ‘This means that in the circumstances of 37 one needs to live as quietly as possible. Take care to emphasise the official good humour and the official joyfulness […] but genuine relaxation—friendly feasts, private gatherings, pranks—you need to keep that tied up. It was a time to bury yourself in your burrow’. ['Это о том, что в условиях 37-го надо жить, как можно тише. Старательно подчёркивать официальное веселье и официальную радость ("петь, пуская петуха"), но настоящей раскованности — дружеские пиры, посиделки, розыгрыши — вот с этим надо завязывать. Пора забиваться в норку.'] The gravity of the statement is undercut, of course, by the over-the-top alliteration. ‘Release the red rooster’ is an expression usually referring to anarchic arson by peasant rebels.
Mikhail Mikhailovich Zoshchenko (1895-1958), the Leningrad short-story writer known for his lugubrious depictions of ordinary people in ordinary situations, who was not oppressed during the 1930s, but subjected to official condemnation in 1946.
VI
Pushkin died on 10 February 1837, after being fatally wounded in a duel two days before. The centenary of his death was commemorated in the USSR with massive pomp and wholesale re-imaging of him as a Russian national hero with dissident democratic and republican views rather than as aristocratic rake, imperialist/chauvinist in politics, and (at least towards the end of his life) a believing Christian. See Stephanie Sandler, Commemorating Pushkin: Russia’s Myth of a National Poet, Stanford UP, 2004.
Loseff’s poem makes passing reference to some of Pushkin’s best-known lyrics: in Stanza II to ‘Winter Evening’, in which the poet asks his old nurse to sing him old songs, including ‘how the girl went for water early in the morning’; in Stanza V ‘the red rooster’ possibly refers to ‘The Prophet’ (1826), with its final exhortation ‘with your word burn the hearts of men’, i.e. write engaged, public poetry; also in Stanza V, ‘Exegi momumentum’ (1836), with its boast about ‘the people’s path will not be overgrown’; and ‘Whether I wander through noisy streets’ (1829) with the phrase ‘at the entrance to the grave’; stanza VII cites the first line of ‘The gloom of night lies over Georgia’s hills’ (1829); and in stanza VIII, ‘…in this world there is no happiness’, comes from ‘It’s time, my friend, it’s time…’ (1836?).
Lines 4-10 of Stanza VI seem perhaps to present the poem’s core; is LL really suggesting that the Russians seem to respond enthusiastically to terror?
VII
Gorky Park: in Russian ‘The Central Park of Culture and Rest, named after Gorky’.
‘the Writers’ House’: the building housing the administration and dining facilities of the Union of Writers, open to members only.
VIII
растение, похожее на дудку,/«Турецкий марш» со своего ж листа/уже дудит. Nikita Eliseev sees in this a reference to Nikolai Zabolotsky’s poem ‘Lesnoe ozero’ (1938); the experience to which it refers probably occurred near Leningrad in the autumn of 1937 (Pratt, 233), and the poem was actually written in a railway coach for prisoners (vagonzak) en route to Siberia after Zabolotsky was arrested in 1938: ‘Один лишь кулик на судьбу негодует/И в дудку растенья бессмысленно дует.’
‘The Turkish March’: Association with the famous piano piece by Mozart would appear to be a red herring. The reference, suggests Mikhail Efimov, is rather to Soviet-Turkish relations, for which 1937 was a pivotal year, when, as a result of Turkey’s realignment with Fascist Germany, the friendly relations with the USSR that had been maintained since the revolutions in both countries began to cool. These friendly relations are documented in several films: see "Анкара — сердце Турции" (1934), commissioned by Ataturk; see http://www.kino-teatr.ru/doc/movie/sov/12283/annot/; and "Турция на подъеме" (1937), see http://www.eleven.co.il/article/14953. In July 1936 the Montreux Convention was signed, whereby Turkey regained control over the Straits, contrary to the interests of the USSR.
IX
‘A drumbeat! Listen! Trumpets? Trumpets surely!/Trumpet and drum through background noise and gloom’. Mikhail Efimov suggests that the music concerned here may be Shostakovich’s Symphony No. 5 in D minor, Op. 47, which was composed between April and July 1937, and first performed on 21 November by the Leningrad Philharmonic under Evgenii Mravinsky. The performance was a triumph; it marked the composer’s return to the public after being brutally criticized the previous year. There is the additional connection that Shostakovich was called in by the KGB after the arrest of Tukhachevsky and interrogated about their relationship; the exact facts of this incident are disputed.
X
The jasmine flower is an enigmatic image.
a golden cohort: ‘The Golden Cohort’ (Zolotaya rota), originally an elite detachment of grenadiers, formed as an honour guard for the Tsar in 1827; later, by ironic contrast the phrase came to mean the urban dregs, with criminal associations. It also evokes zolotorotsy or zolotari, night soil men or honey bucket men, i.e. workers who removed human waste from dwellings before flush toilets came into general use (see Eliseev’s summary of the poem’s theme, above). The phrase probably indicates primarily the cohort of Leningrad poets and intellectuals born between 1930 and 1940, and in particular Loseff’s own particular group of friends, who appear constantly as individuals and as a group in his writings in poetry and prose.
Over a gilded horn that silver keynote/ascends and winds above: Could this be the Golden Horn in Istanbul? Or does it refer to the hull of the ship on top of the St Peter-Paul Fortress in Petersburg? 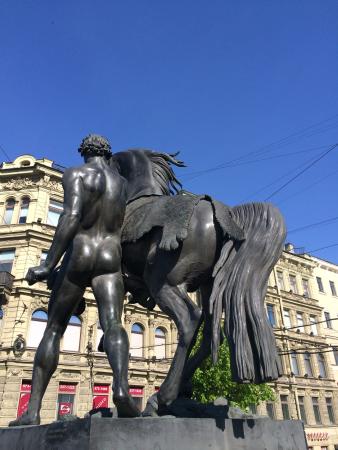