Two More Reviews of 'As I Said' in English 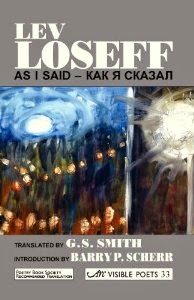 AS I SAID
Lev Loseff
translated by G. S. Smith
ARC Publications
by Amy Henry
This bilingual collection of the poems of Lev Loseff begins with a preemptory acknowledgement, by series editor Jean Boase-Beier, of the difficulties of translating poetry, especially when a reader has no knowledge of the original language and thus might miss subtleties that the poet intended. As Boase-Beier puts it:
We know that translated poetry is neither English poetry that has mysteriously arisen from a hidden foreign source, nor is it foreign poetry that has silently rewritten itself in English. We are more aware that translation lies at the heart of all our cultural exchange; without it, we must remain artistically and intellectually insular.
With this in mind, both Russian and English versions are here provided “side-by-side because translations do not displace the originals; they shed new light on them and are in turn themselves illuminated by the presence of their source poems.” And translator G. S. Smith shows a similar attention to detail and attitude that goes beyond mere words: Smith was actually able to translate much of Loseff’s personality in the poems, as the two collaborated over the translations over a period of several years and Loseff gave his approval to the resulting works. Loseff, an editor himself who has translated Joseph Brodsky, guided Smith in some areas with comments and suggestions, but his firmest request was that the poems be presented in reverse chronological order. It was Smith who chose the poems for the collection, selecting those that had the best prospects for accurate translation.
Yet another scholar, Barry P. Scherr, contributes an introduction to Loseff that gives some essential biographical information, making the poems that much more compelling. Loseff was part of what was casually called the “philological school” of Russian poets; intensely familiar with and influenced by traditional Russian literature, he refers to his country’s most famous writers (e.g. Pasternak, Dostoevsky, and Pushkin) in many of his own poems. Besides this cultural expertise, Scherr notes that Loseff is also a poet of observation, one whose emotion “arises from contemplating the world outside the poet, rather than the writer’s most intimate thoughts.” Yet Loseff does reveal himself on his terms, subtly, and G.E. Smith picks up on such nuances.
“At the Clinic” for example, will strike many readers viscerally (here’s the full poem):
The doctor mumbled things about my kidneys,
and looked away. I pitied this MD.
For life to me had burst its inhibitions,
and now flowed heatedly and easily.
Diploma on the wall. MD. His awkward silence.
Hand scribbling out a slanting recipe.
While I'm astonished by this easy lightness—
so easy had the news turned out to be!
What happened to the demons that beset me?
I'm breathing easily, not like before.
I'll go and let them have some blood for testing,
and give a bit more blood to sign this poem.
A great deal is revealed in the poetic subtext: “Burst” and the phrase “flowed heatedly” contrast with the idea of ease. In fact, Loseff uses variances of “easy” four times in the poem’s three stanzas. At the conclusion, there’s a play on words in regard to blood—using both “give” and “let”—that indicates a sense of surrender despite the lightness he’s just described. Curiously, Loseff initially speaks of the “doctor” delivering the news, only to repeatedly call him “MD” afterwards. The usage on the facing page in Russian also uses a different word for doctor after the first, which made me curious if there was an aural play on words here, as “MD” in English sounds like “empty.” Does the Russian word Loseff used, Врач, also hint at another meaning?
A poem that reaches into Russian literary history is “The Blood Washed Off. The Axe Dumped in the River,” which seems to make a clear reference to Dostoevsky’s Crime and Punishment. While Raskolnikov stashed the axe rather than dumping it in the Neva, Loseff contrasts this murderer’s obsession over guilt (felt even before the murder occurred) and cleanliness with contemporary criminals, who “abandon axe and empty bottles by the body, mumble / when questioned, not bother washing off the blood.”
Throughout the collection, Smith’s translation beautifully captures a duality to the meanings. A phrase like “the river’s molten-honey seethe” in a poem about the death of a commercial area easily reminds the reader of the river Lethe and the feeling of forgetfulness. The layers are uncovered by Smith but never fully revealed—keeping Loseff an enigmatic poet whose work is destined for further study.
ORIGINAL HERE:  http://www.raintaxi.com/online/2012winter/loseff.php
***
Warwick Review, December 2012, Ian Revie

Lev Loseff’s As I Said comes with a very enlightening introduction by Narry P. Scherr, Professor of Russian at Dartmouth College, which details the importance of rhythmic structures and sound patterns in the original Russian poems and underlines the challenges facing the translator attempting to render them in English. He present Loseff as very much a classicist and one whose roots, despite his long exile in the United States, remained firmly in his native city of Leningrad/St Petersburg?almost half his life was spent in New England. Loseff was himself a scholar and a specialist on Joseph Brodsky, to whom his indebtedness is obvious; but his poems are no means literary in their inspiration, as is clear in these excellent versions by G.S.Smith, Professor Emeritus of Russian at Oxford. Much of what Loseff writes arises from perception of the surrounding world whether immediate or remembered:
Awakened by an unexpected silence,
a sudden gift from heaven, white as white,
with indignation I reject?should say
indifference?the horrors of the night.
These lines give a fair idea od how the poet’s subject matter so often appears existing in the immediate present yet inextricably linked to dimensions of past time and imagination, for, as the second verse makes clear, it is of the nature of perception to be shaped by the roots of experience:
Vertically downwards, through the matted
Growing things that crowd my garden plot,
Here comes the God of atmospheric matters,
In order to disperse our parlous lot.
It is almost unnecessary to say that such roots inevitably touch matters political, for although almost all of Loseff’s work dates from his time in America, had had reached the age of 38 before leaving the USSR and therefore had lived with the suffocating presence of ideological conformity, or non-conformity and its consequences. In ‘Joseph in 1965’ he writes
Those Party activists were bloody-minded
enough to hound a flower for its fragrance
or a star for its twinkle.
From the poet they demanded
Poems “with civic resonance”.
and makes Brodsky’s period of enforced hard labour into an act of silence resistance:
He listened to his heart’s fading quake,
To the clamorous squawk of roots,
and mended those tatty roofs.
However, such roots are also deep n the fabric of Russian life in all its aspects. Towards the end of the volume, a long sequence, ‘The Extended Day and Other Memories’, begins with an evocation of a timeless Russia:
I see it clear: the dacha, the wild roses,
the wooden fence, the gate with rusted latch,
the shiny-wrinkled, baggy trousers;
I touch wood, superstitious as I am.
I see it clear: the samovar is fuming
like tsar or some high officer annoyed?
a colonel who’s been fuelled up with fircones,
and shakoed by a plume of lilac smoke.
So near, how out your hand and you can feel it,
And it is the immediacy with which the memory informs the present that seems to be the source of the power in Loseff’s work. This volume makes better known an undoubtedly major Russian poet to be placed alongside those greats who have unflinchingly borne witness to a troubled century, to the impossible love of a homeland from which one is exiled, and to lives lived with courage in the face of repression.